mentioned package  consisting of main locations around the island such as Sigiriya,Polonnaruwa,Kandy etc.It’s comfortable  with families and small groups.

Meet and greet in the airport drive to Negombo fish market.Negombo is second larges city in western province.the fish market located near the negombo lagoon. Fishermans already start Fishes offloade from the boats before 5.00am.there are few wooden tables cut fishes easily and many kind of fishes as lobster, crab, prawns tuna,  even sharks.

A place you will really enjoy and never forget.Started in 1972 the Elephant Orphanage It was relocated to at the present Place in 1975 . You can see milk feeding , Bathing at Ma Oya just in front of the orphanage.

The rock fortress regarded as the eighth wonder of the ancient world, was built by king Kassapa in the 5th century A.D and was royal citadel for more than one year. It is a complex of buildings, part-royal palace, and part fortified town, and water gardens on par with the best in the ancient world, constitute a magnificent and unique architectural feat of the ancient Sinhalese

The holistic approach to health,where body,mind and soul are inextricably linked,seeks to balance the body’s energies to ensure good health and a feeling of well-being.A comprehensive treatment includes massage,herbal baths,oil treatment and a special diet,as well as meditations,Yoga and music.Ayurveda is used to treat everything from stress to diabetes,migraine,asthma,arthritis and high blood pressure,helps boost the immune system and may even help delay the ageing process.

The Mahawansa is a very important historiography of philosophy in srilanka.it was made by monk of Mahanama.According to Mahawansa Anuradapura was build by major Anurada,as inhabited country 543 BC period of wijaya king. However king of Pandukabaya improved this village with so many facilities 382.BC Anuradapura is primus city in the world kept 1500 years continuously. 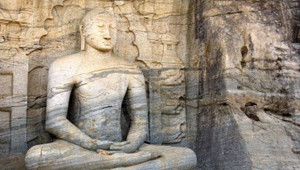 Mahawansa said Polonnaruwa is second capital city in sri lanka.the Anuradapura first kingdom currently came down with many reasons.Specially they failed stabilize  the tendance in each regions  as south indian invasion.king of v Mihindu was conduct Polonnaruwa as administration center 1017AD.but he carried to india as a prisoner by Chola.Anyway king of parakrabahu was build the polonnaruwa as main economic center 1153 AD and he united  this motherland on that time.

Sri Lankan’s used bullock cart as a main transportation many years ago. also there are provide bullock cart with two bull go to lake.it’s 30 – 40 minutes and canoeing in the lake same time.(with life jackets)will be visit to chena (cultivated area)   meet farmers  get lunch or dinner as your request.

There are many Places providing Elephant ride safe and enjoyable.

Nalanda gedige is a Stone Temple  look likes Hindu Temple . But  ,inside can see both Hindu God’s & Biddha ‘s statues .The First Build was 7 C -8 C by king Manabharana .As per popular usage there was a sign of the  beginning of sinhalese  in statue of Lion .

Many herbal gardens are both side of spice road.Srilanka Spices were very important During ancient times Greeks, Romans and the Arabic for trade.there are many kind of spices as cinnamon,cardamom,pepper,vanilla etc.

Sri lanka larges botanic garden located Kandy Peredeniya.The history of botanic garden dates as far back 1371 AD when king Wikkrama bahu ascended the throne and kept court at near mahaweli river.Later, in the reign of king kirthi sri 1747AD to 1780AD this was made a royal garden and from 1780AD – 1798AD king of Rajadi Rajasinha resided therein.  The garden biggest 59 hectares and spices under cultivation  over four thousand and many kind of flowers.

Kandy down town local market.
Kandy is second largest city in the country and, it is last kingdom in sri lanka.King of sri Wikkrama Rajasiha govern until 02nd march 1815.The city famous for shopping  as reason so many different kind of shops there and prices quite reasonable less than Colombo.

The dance is conducting with srilanka’s culture aspects.so it’s really interesting with drams,dance with fire,masks etc.

The most excellent majesty holy place in the world with Buddhism. After the parinirvana of Buddha preserved relics by princes Hemmala and Dhantha.The period of king Kirthi Sri Megawarna (301-328AD) They arrived to island(the Place Lankapatuna)Kept relics at Isurumuni vihara(Megagiri viharaya) in Anuradapura.However,when was change kingdom also tooth relics kept different places as protection.Be Possibility visit there in the evening.

Srilanka has the wide variety of precious stones among the world’s gem producing countries – blue sapphires,star sapphires,rubies,cat’s.garnets,moonstones,aquamarines and topazes being just a dazzling handful.

there’s much in between .Visit a handicraft shop and familiarize yourself  with traditional designs such as makara(a mythical animal,lion,swan,elephant and louts which are most evident in brasswork (Boxes,trays,lanterns,vases) and silverware (ornately carved and filigree jewellery,tea-sets)that make excellent souvenirs.

Batik is an art medium and methodology for creating design, usually on cloth, by applying wax to portions of the material and then dyeing it, then removing the wax. This can be done to make vibrant colors and incredible designs.

In 1824 a tea plant  was brought from China by the British and planted in the Royal Botanical Gardens, Peradeniya, Ceylon.Tea cultivation was established in 1867   by James Taylor in Sri Lanka, and is now produced year round  in the central highlands and southern regions of this beautiful tropical island. Based on the altitude at which it is grown tea is classified as high, medium or low grown teas.

leave from hotel 05.00 – 05.30 am
Situated at around 2000m above sea level and surrounded by lush tea plantations. Nuwara Eliya is the main hill resort of Sri Lanka and the heart of the tea industry. This city with an elevation of 6200 meters is the highest in Sri Lanka. Once a pleasure retreats of the European planters the town is still very much an English town with many English style bungalows and buildings.

Walk alone through the silent  plain of Horton to the end of the world. Stand 2,000 metres high,this park consists of open grasslands interpenetrated with umbrella shaped mountain forest patches .the plains are of  stupendous  beauty and contains most of the endemic plants and animals.

Most of visitors are enjoy with srilanken train journey   N / Eliya  to Ella. . The journey is fanny,  interesting with local people, and the track  is hillside with water falls,tea field etc.

Ella is a beautiful small village in Sri Lanka’s hill country. It has an almost perfect climate and occupies a very scenic vantage point, with Some of the places you could see in Ella are the Ella Gap, Ravana Ella Falls, Little Adam’s Peak and Bambaragala Peak among the other many varied pleasant walks with stunning scenery.

Buduruwagala is an ancient Buddhist temple in Sri Lanka  and it’s a magical archeological site .The complex consists of seven statues  and the highest one 16 mtrs .The images including Mahayana tradition .The statues date back to 10 or 9  century AD .Close to the right foot of the Buddha is a hole in the shape of an oil lamp flame it’s rendered the history of unbelievable  sculptures of Sri Lanka .

Yala is the second  largest and most famous National park with Yala West (Ruhuna) combining a strict nature reserve with the Park. Sri Lanka boasts the world’s largest population of leopards.Possibility  see  this national park Leopard, elephant and many smaller animals, sloth bears, deer, wild boar, buffaloes, crocodiles and monkeys. Birds are in profusion – up to 130 species.

Blow hole is located on the suthern Sri Lanka Coast .the Ocen water flows underneath the shore ,and then comes out of this hole due to Pressure .Water shoots up every Mimute or so , and it gives very serene feeling . The spray is often as high as 25m .Giving on lookers a Seabath on Land.

Light house at Devinuwara  (Night stay at Mirissa,Ahangama or Hikkaduwa.)

The Lighthouse was built by British in 1894 at Devinuwara (Dondra edge). It is about172 feets hight at sea level and considered as the largest lighthouse in southern Asia.

Whale and dolphin watching in Mirissa is one of the most exciting water activities you can do in Sri Lanka during your holiday.

Galle Fort, in the Bay of Galle on the south east coast of Sri Lanka, was built first in 1588 by the Portuguese,then extensively fortified by the Dutch during the 17th century from 1649 onwards.

The Coral Garden here is considered to be the best out of all such coral gardens found in Asia.These corals are found in various forms , shapes and colours. They are a very fascinating sightcorals.especially when there is bright sunlight which gives a very clearer view of the corals.

Maadu ganga flows across Balapitiya  and is one of the rarely visited, unspoiled attractions any nature lover can find in Sri Lanka. She boasts of having a cluster of 64 small islands scattered along her path and the most of which are covered with mangroves and uninhabited.